Jagannath Rath Yatra is one of the most massive and grand holy gatherings in the world; that transpires in Puri, Odisha. It falls in the month of June and July in the Gregorian calendar, which is known as Ashad Dwitiya in the Panchang/Hindu Calendar. It is an age-old tradition where Lord Jagannath (avatar of Lord Vishnu/Krishna) along with Shree Balabhadra (His brother) and Devi Subhadra (His sister) undertake an expedition to the Gundicha Mata Temple. The Jagannath Temple in Puri is believed to be one of the four most pious temples in India; where all the three siblings are worshipped together. Essentially, this occasion celebrates the return of Lord Krishna to Vrindavan. It is also known as the Festival of Chariots or Puri Rath Yatra. In 2016, this Rath Yatra Festival will be celebrated on the 6th of July..

A bathing ceremony of the three idols of Lord Jagannath, Balabhadra and Subhadra takes place around eighteen days before the festival. This is known as Snana Yatra. On the occasion of the Rath Yatra, devotees take a bath and head to the temple. The idols are places in the chariots by the residing king of the territory followed by an invoking ceremony. In the afternoon, the procession commences with a lot of pomp where throngs of devotees pull the chariot with thick ropes. A Maha Prasad feast is organised and offered to the Lord. There are a total of 56 dishes and therefore, it is called Chappan Bhog. The most astonishing fact about the prasadam is that it is cooked with several pots placed one above the other and surprisingly the one at the top cooks the first.

Jagannath temple allows the entry of only orthodox Hindus to offer prayers in the temple premises. This event is a day where people from all caste and creed can take darshan of the revered deities. It is believed that Lord Jagannath has presented himself in this ‘yuga' to free humankind from misery. The real essence of this Yatra is that the individual submit himself entirely to the sarthi (in this case, God) and by doing so they will be able to traverse the bonds that keep them tied to their material existence. Simply put, it aids in the path of salvation. 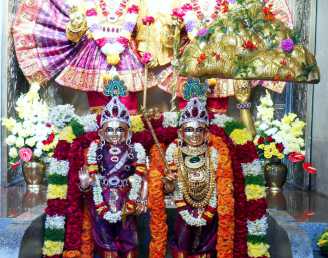